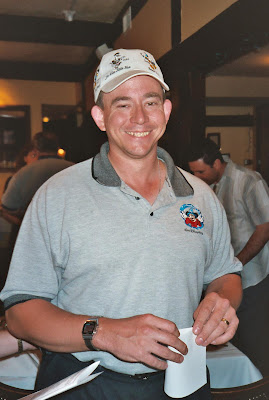 From Right Wing Nut House I was stunned to learn that a brother in the fraternity of bloggers, Andrew Olmsted, was killed in Iraq yesterday. Here's an excerpt from his final, posthumous entry:
This is an entry I would have preferred not to have published, but there are limits to what we can control in life, and apparently I have passed one of those limits. And so, like G'Kar, I must say here what I would much prefer to say in person. I want to thank hilzoy for putting it up for me. It's not easy asking anyone to do something for you in the event of your death, and it is a testament to her quality that she didn't hesitate to accept the charge....
Believe it or not, one of the things I will miss most is not being able to blog any longer. The ability to put my thoughts on (virtual) paper and put them where people can read and respond to them has been marvelous, even if most people who have read my writings haven't agreed with them. If there is any hope for the long term success of democracy, it will be if people agree to listen to and try to understand their political opponents rather than simply seeking to crush them. While the blogosphere has its share of partisans, there are some awfully smart people making excellent arguments out there as well, and I know I have learned quite a bit since I began blogging. I flatter myself I may have made a good argument or two as well; if I didn't, please don't tell me. It has been a great five-plus years. I got to meet a lot of people who are way smarter than me, including such luminaries as Virginia Postrel and her husband Stephen (speaking strictly from a 'improving the species' perspective, it's tragic those two don't have kids, because they're both scary smart.), the estimable hilzoy and Sebastian of Obsidian Wings, Jeff Goldstein and Stephen Green, the men who consistently frustrated me with their mix of wit and wisdom I could never match, and I've no doubt left out a number of people to whom I apologize. Bottom line: if I got the chance to meet you through blogging, I enjoyed it. I'm only sorry I couldn't meet more of you. In particular I'd like to thank Jim Henley, who while we've never met has been a true comrade, whose words have taught me and whose support has been of great personal value to me. I would very much have enjoyed meeting Jim.
This is just a small portion of what he wrote. To read the rest, go to:
http://andrewolmsted.com/archives/2008/01/final_post.html
A Rocky Mountain News article provides more information: http://www.rockymountainnews.com/news/2008/jan/05/just-devastating-news/
Out of respect for his wishes, no comments will be allowed for this posting.
Posted by "Doc Adler" at 6:17 PM 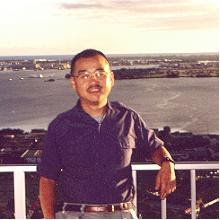 Visit to Hawaii, 1988 (Pearl Harbor in background) This is a showcase and forum for my passions. The alias "Doc Adler" appears after each posting to bring attention to my other, psychological blog, "Up and Down Time" I plow through a large volume of news sources so that you don't have to.... We make no apologies for our unabashedly conservative bias, as our readers are looking for an antidote to the liberal bias of larger news outlets. We are almost unique in our commitment to cover not only politics and current events, but also the latest in toilet technology, and in championing the cause of homeless people and the mentally ill. To see my profile on Mormon.org, see http://mormon.org/me/2R75-eng/Charles

Do You Hate Lawsuits as Much as I Do? I would be a total ingrate if I didn't include a link to a site (click on picture) that preserves the memory of the now-disbanded 497th RTG in Wiesbaden, Germany.